Turbos work by using an engine's own exhaust gasses to power a turbine inside the turbo kit. This turbine sucks in air from in front of the Slingshot where it is compressed and passed through an intercooler. Once the air is further condensed by the cooling mechanism, it is injected into the engine where the extra oxygen improves the combustion cycle and adds more horsepower to the Slingshot. Due to the fact that the turbo is reliant on the amount of exhaust a Slingshot expels, the boost a Slingshot will receive from the turbo has a period of lag time between when the pedal is pressed and when the turbo boost kicks in. Only when the turbine spins fast enough will it compress enough air to provide the sought after boost. How much lag time drivers experience is entirely dependent on the size and style of the turbo being installed. However regardless of which turbo is being implemented, once it kicks in the results will be readily apparent with a significant increase in how much torque a Slingshot can produce. A final and often overlooked benefit of a turbo charged engine is that the additional piping serves as a sound suppressor, meaning a turbo charged engine will run much smoother and more quietly than a stock engine. 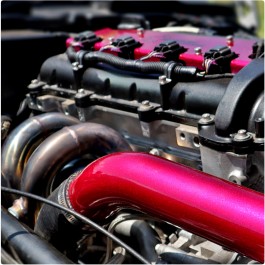