Slingshot engines run on fuel, but the way in which that fuel is delivered to the engine greatly affects performance. When gasoline is pumped from the gas tank it travels through the Slingshot's fuel lines and is distributed by the fuel rail, which will ideally apportion equal amounts of gasoline to each cylinder of the engine. An uneven or inadequate distribution of fuel will leave an engine struggling to reach its full potential. Thus choosing to upgrade to a fuel rail that is built to maximize this delivery can mean the difference between obtaining those elusive lost RPM's, and lagging behind the other Slingshot's on the road. There is also the added benefit of increased fuel efficiency, meaning a fuel rail will pay for itself in time. 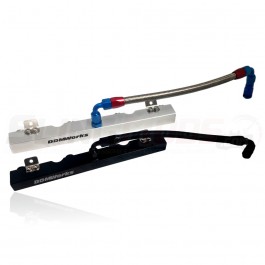